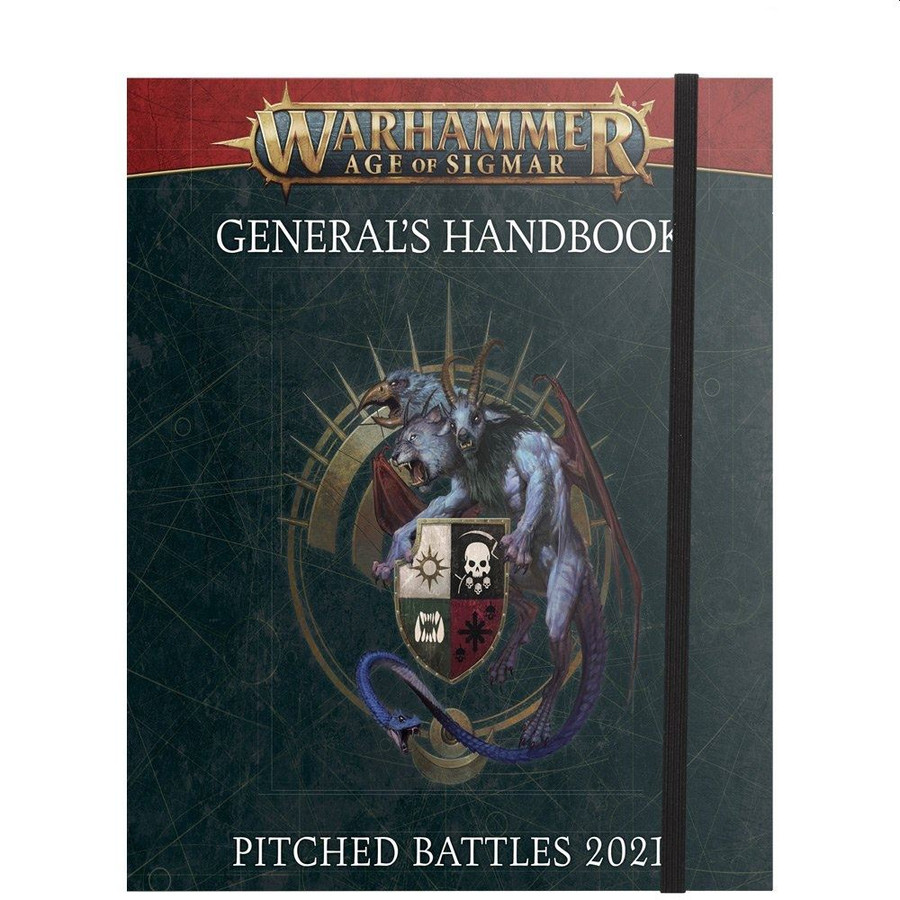 The essential 2021 General’s Handbook is an invaluable supplement that enhances your games of Warhammer Age of Sigmar. This year’s edition is divided into two separate books – the General’s Handbook comes as a 96-page ring-bound hardback, while the Pitched Battle Profiles book is a 34-page softback.

- High-level background information on Ghur, the Realm of Beasts, which is the setting for this General's Handbook and Pitched Battle Season.
- A focused description of the war of Thondia, the area in Ghur which is in the midst of desperate conflict. Thondia is key to the current narrative of Warhammer Age of Sigmar, and is part of the setting for this General's Handbook and Pitched Battle Season.
- Rules for a new Region of War – The Ghurrish Heartlands – which include two special rules (Predators and Prey and Seismic Shift), one additional Realmsphere Magic spell available to all Wizards (Metamorphosis), and one additional Realm Command which all players have access to (Feral Roar).
- Two additional core battalions that players can include in their army in addition to the Core Battalions included in the core rules: Alpha-Beast Pack and Hunters of the Heartlands.
- Rules for eight grand strategies that dictate what an army will try and achieve during the battle. They offer additional victory points if completed by the end of the game: Sever the Head, Hold the Line, Vendetta, Dominating Presence, Beast Master, Prized Sorcery, Pillars of Belief, and Predator's Domain.
- Rules for eight battle tactics that can be used to determine who won the game. They reflect commands given by the leaders of the army over the course of the battle, and represent the army trying to achieve certain goals on the field of battle each turn: Broken Ranks, Conquer, Slay the Warlord, Ferocious Advance, Savage Spearhead, Aggressive Expansion, Monstrous Takeover, and Bring It Down!
- A photocopiable scoring sheet, designed to keep track of the various objectives throughout the battle.
- Guidance on the minimum accepted standard for using miniatures in Pitched Battle games of Warhammer Age of Sigmar.
- 12 battleplans for the Pitched Battle 2021 season: Marking Territory, Savage Gains, First Blood, Power Struggle, Survival of the Fittest, Tectonic Interference, Apex Predators, The Vice, Tooth and Nail, Feral Foray, Power in Numbers, and The Veins of Ghur.
- A list of all the official publications which can be used when building an army for use in Pitched Battles.
- Updated warscrolls for the following 17 endless spells: Horrorghast, Aethervoid Pendulum, Chronomantic Cogs, Emerald Lifeswarm, Geminids of Uhl-Gysh, Malevolent Maelstrom, Prismatic Palisade, Purple Sun of Shyish, Quicksilver Swords, Ravenak's Gnashing Jaws, Soulsnare Shackles, Suffocating Gravetide, The Burning Head, Umbral Spellportal, Soulscream Bridge, Shards of Valagharr, and Lauchon the Soulseeker.
- The Warhammer Age of Sigmar core rules

Please note: The ring-bound design of the General’s Handbook and layout of the battleplans have been designed so that the book can be folded flat to save space, while still providing an overview of the essential information to easily reference once the game has begun.

Chaos: Beasts of Chaos, Blades of Khorne, Disciples of Tzeentch, Hedonites of Slaanesh, Maggotkin of Nurgle, Skaven, and Slaves to Darkness.

PLUS:
The General’s Handbook 2021 also comes with a card token board, which contains 14 double-sided tokens as follows: